HomeHEADLINESChildren urge FG to involve them in decision making
HEADLINES

Children urge FG to involve them in decision making 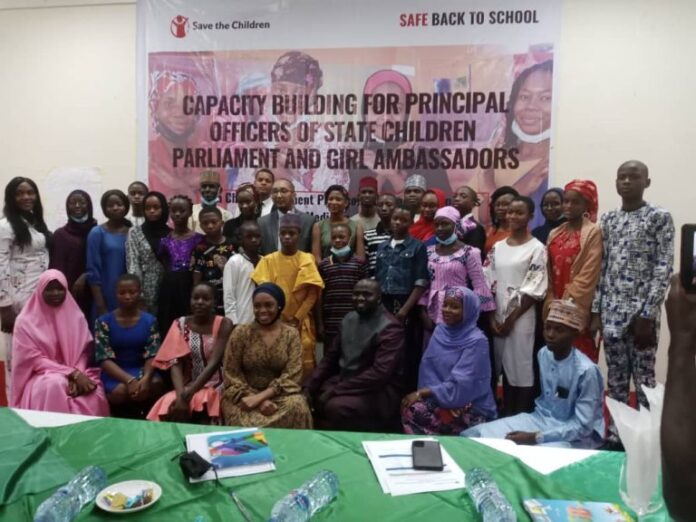 PRINCIPAL officers of State Children’s Parliament and Girl Ambassadors have called on the Nigerian Government to involve them in the process of decision-making process in the country.

They asked the authorities to always allow them to air their views on issues affecting them.

The children made the call in a communiqué at the end of a two-day capacity building training for Principal Officers of State Children’s Parliament and Girl Ambassadors.

According to the News Agency of Nigeria (NAN) Save the Children International (SCI) organized the training its implementing states of Benue, Borno, Cross River, Gombe, Jigawa, Katsina and Yobe.

The communiqué,  noted that positive behaviours and decision-making should be taught in families and schools.

Others are gender inequality, limited access to education, school dropouts and discrimination.

On  children health issues, they tasked the government on compensation for doctors, and an increase in budgetary allocation for children’s healthcare.

They also called for a child-friendly justice system, while making a case for stronger laws against children sexual abuse while rehabilitation should be provided for affected ones.

They called for a halt on all forms of abuse on children to help prevent molestation demanded intervention for children who were victims of abuse, neglect and exploitation.

The communique noted that:

“There should be legislation and implementation of the Child Rights Act (CRA) and free education for all.

“Awareness on the consequences of early marriage, which alters the course of a girl’s life and her potential should be raised.

“Parents should be encouraged to take their children to school and false myths on western education should be shunned.

“Leaders should create an enabling environment for education and government should invest more in education for out-of-school children.’’

and demanded that security agents should be equipped to protect children from attack.

They called for the implementation on cattle ranching policy to prevent cattle-herder crises and more security personnel should be deployed to affected areas.

The children said that there was need to raise  awareness in rural areas  and religious leaders about educating girls with the  provision of  enough schools for girls to attend .

They appealed to the government to fulfill its commitment to increase education funding and ensure that states and their local government also invested in education.

Mr Amanuel Mamo, Director, Advocacy and Campaigns, SCI, Nigeria called on stakeholders at Federal, State and Local Government Areas (LGAs) to renew their commitments to protect, respect and fulfil the rights of the child as articulated in the Child Rights Act (2003).

“Having the opportunity to listen to these children over the last two days is a reason, more than enough, to celebrate children.

”If the future is at hand, therefore, we are given historical opportunity and responsibility to shape and paint the futures as bright as we want it to be.

“The smart thing to do to paint the future is to invest in children.‘’

Mamo called  upon the states yet to pass the Child Protection Bill to prioritise the adoption and enforcement of the Child Rights Act (2003).