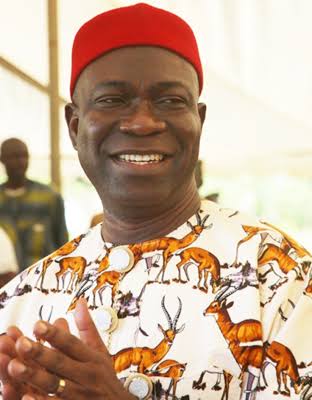 AMIDST speculations of his defection to the All Progressive Congress (APC) to further his governorship ambition, former deputy senate president, Ike Ekweremadu, has officially withdrawn from the 2023 gubernatorial contest in Enugu State, and congratulated the People’s Democratic Party (PDP) flag bearer, Peter Mba.

On Thursday, Ekweremadu, in a statement he personally signed, noted that he took his decision after a painstaking “introspection on our contributions to the development of the PDP,” wide consultations with the elders of the party friends.

In the statement titled, “Time To Unite,” the senator noted further that he had the assurances of Mba, that he would integrate “our programme “Pathway to a New Enugu State” into his plan for Enugu and ensure the participation of everybody in his campaign team and government.

He acknowledged that “the treacheries of the moment,” would not outlive the unity in the state, and bemoaned the combustible security situation  in the South East, which persuaded him not to put anybody in harms way “as my ambition is not worth the life of any Enugu son or daughter.”

In congratulating Mba and wishing him success, Ekweremadu noted that in the last two years he had set out to run for the governorship.

According to the statement,“our mission was to change the narrative in the governance of our state and possibly inspire other states in the delivery of impressive governance.

“To show our seriousness, we developed and presented our manifesto, “My Agenda for Enugu State: A Pathway to a New Enugu State.”

“We were prepared to deliver good governance that would see to the prompt payment of salaries and retirement benefits to our senior citizens.

“Our hope was that this would lead to a total recalibration of governance in Nigeria with Enugu State as a starting point and model.

“Within the period, we set up a platform with a grassroots base. We named it Oganiru Ndi Enugu. It was duly registered. We received 77 support groups, which showed uncommon support to our mission.”

The agenda covered plans to  deliver water and electricity to communities, improve the environment, change the face of tourism, deliver modern agriculture, healthcare, entertainment, ICT, security, sports, provide jobs, build industries in the  of local governments and change the economy.

Hinting of sabotage, he noted that, “unfortunately, as we were doing these, some of our compatriots were busy conspiring and planting landmines to frustrate our rescue and transformation mission. We have witnessed betrayals and high level of ingratitude on this journey.”

But despite that Ekweremadu noted that the the political space has been opened for greater participation and the political consciousness of the people had been raised.

He expressed his gratitude to his campaign team, the Ikeoha Campaign Organization, supporters at all levels and friends especially those who might not be satisfied with his decision and promised “to stand by you collectively and individually in appreciation.”