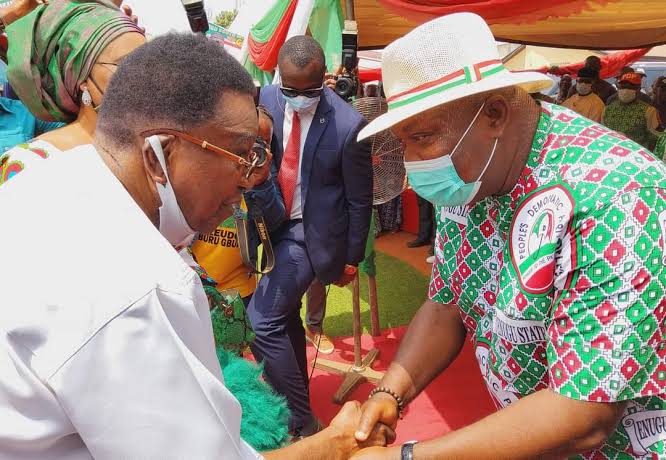 LESS than 24 hours after he dismissed claims by Chief Jim Nwobodo regarding his support the governorship aspiration of Dr. Peter Mbah, former deputy president of the senate, Ike Ekweremadu, has backed out of the governorship primary of the People’s Democratic Party, (PDP).

A statement by the Director-General of Ikeoha Campaign Organisation, Charles Ogbo Asogwa on Wednesday, stated that, “we wish to inform our supporters and Nigerians that the former deputy president of senate and foremost governorship aspirant in Enugu State, Ike Ekweremadu, will not be participating in the PDP governorship primary election scheduled for this Wednesday, May 25, 2022.”

Thanking supporters for investing “in the actualisation of the ‘Pathway to a New Enugu State,’ ” the statement assured that they will be kept abreast of the way forward.

Ekweremadu’s withdrawal from the primary trails an announcement by the former governor of old Anambra State, Nwobodo, endorsing the Chairman of Pinnacles Oil, Mbah, as the right person to succeed Ugwuanyi.

The announcement on Tuesday looked like a twist in an earlier arrangement between Ugwuanyi and the PDP gubernatorial aspirants from Enugu East senatorial zone.

Ugwuanyi, who has won the Enugu North senatorial ticket, had in a meeting with the aspirants extracted their commitment to abide by his choice of the party flag-bearer.

Fifteen of the 16 aspirants  signed a Memorandum of Understanding (MoU) to accept the governor’s choice of the party’s candidate.

Although Mbah is one of the aspirants that signed the memorandum of understanding, what is not clear yet is if Mbah is also Ugwuanyi’s choice?

Nwobodo told journalists that, he had spoken often with the Governor, “and I told him that anybody that will succeed him must bring peace.

“I have heard all kinds of rumours about people claiming they are sponsoring Peter Mbah, but he knows that I brought him into this race.”

However,  sources say that Nwobodo was trying to preempt the governor in the matter, well aware that Mbah might not be Ugwuanyi’s choice.

“Mbah is Jim’s boy and as a major political voice in Enugu East, he has therefore made his case for him believing Ugwuanyi will be forced to listen to him,“ said the source.

It was also gathered that Nwobodo has indicated that he doesn’t feel that Ugwuanyi was not in a position to name his successor from Enugu East.

He had said: “From my interaction with a number of them, I was looking for somebody who I think should redevelop Enugu State.

“As far back as October 2019, I invited Peter Mbah to my house. When he came, I told him to consider running for a position, especially Governor. He didn’t give me an answer immediately, but later he came and said he would consider running.”

He had told journalists that, “tomorrow, people will ask why am I keeping quiet, this is why I’m addressing the media today. I believe anybody who wins the primary tomorrow will be the governor, because the PDP is the only party in Enugu State.”

With reports that some aspirants were stepping down their aspiration for Mbah, a few are already anticipating a horse trading and that the primary might not be the expected straightforward affair.

Meanwhile, it was gathered that former governor and senator representing Enugu East, Chimaraoke Nnamani, who has won the senatorial primary for his reelection, owes a lot of gratitude to Ugwuanyi for facilitating his return to politics in the state has his own candidate.

He hasn’t confirmed speculations as to his choice but a source said he is not too inclined to contend with the governor on his successor for several reasons, although his voice is still highly regarded in the politics of Enugu East.

“After his experience with his successor, Sullivan Chime, he has in personal conversations expressed a recognizable  disinterest on that,” said the source.