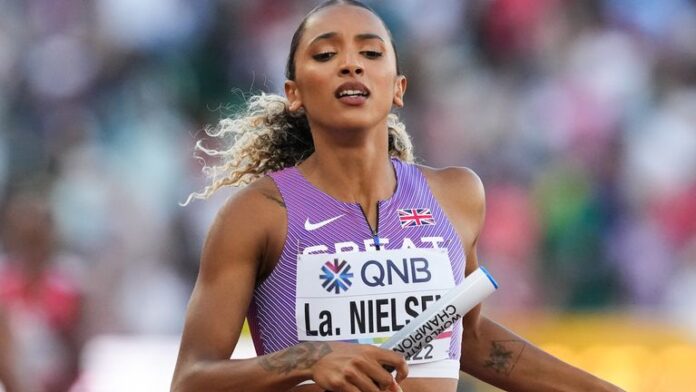 FOR almost a decade, only a few people knew that Lina Nielsen had multiple sclerosis.

Diagnosed at the age of 17, she was told by doctors to stop her athletics training in case it worsened her condition.

She recalls: “I remember turning around and saying, ‘No, I am an 800m runner. I have to qualify for the national championships.'”

Nine years and several national events later, with half the distance to run but with the addition of a few hurdles, Nielsen was lining up for the biggest race of her career at the World Championships.

It was also the day after her biggest relapse.

“It was probably one of the hardest days of my career, maybe even my life,” Nielsen, who has relapsing-remitting MS, tells BBC Sport.

“On the day of the race I was just crying all day.”

Multiple sclerosis is a disease that can affect the brain and spinal cord.external-link It cannot be cured, although treatments are available. Nielsen’s relapsing-remitting diagnosis means symptoms may be mild for a while before flaring up.

Her flare up in Oregon began with her experiencing sensitivity on her left side. The next day, it had worsened “pretty much by the hour”, eventually turning into numbness.

“I remember being on the phone to my boyfriend and he said I would have regretted not running,” the 26-year-old says.

“I qualified by right. I ran the time to get in and also came top two at the [British] trials. So in my head, I was just like ‘go put on your Great Britain vest and do yourself proud’.”

The race helped her decide to publicly discuss her diagnosis before she made her Commonwealth Games debut in August.

“When [the relapse] happened, it completely changed my whole life plan. I wanted to perform and it just stopped me from doing that,” she says.

“If you were to watch that race and compare it to other races that I’d run in the season, you would see that my body’s not quite the same.

“A lot of people are dealing with things you never know about. I kind of wanted to give a bit of an explanation as to why my World Champs didn’t go so well.”

The main symptom that led to Nielsen’s diagnosis was complete right-sided weakness, meaning she struggled to move her right arm and leg. Two months later, in the middle of preparing for her A-levels, she was diagnosed with MS.

She was so upset after being diagnosed that she did not tell her twin sister, fellow British athlete Laviai, about it for another two months.

“It kind of felt like a life sentence. You hear the words chronic and incurable. It was really, really difficult,” she says.

“She had a tingling in her left arm that went on for a bit longer than what would have been normal after getting a vaccine,” Nielsen adds.

“We kind of knew this might be MS because she’s my twin sister and genetics can play a part.

“She turned around to me and said ‘because you’ve done it, I’m not scared.’ She was quite early in the diagnosis so it was looking quite positive.”

The Nielsen twins are known for their outpouring of emotional support for each other after races and Lina says the MS is the reason for that.

“When you see her running to the track, hugging me and us both crying, it’s because we are the only two people that really understand what it meant to even get to that point,” she says.

“She has been such a massive support for me. At times where I couldn’t even brush my own hair, she would brush my hair for me.

“She gave me the motivation to keep going. She’d say ‘you never know how far you’re going to get’ at times when I wanted to quit.”

Another person who has been an inspiration to Nielsen is British Paralympic gold medallist Kadeena Cox.

Nielsen did not know Cox but contacted her on social media when she heard about her diagnosis of relapsing-remitting MS, which came just a few months after Nielsen’s.

“I said: ‘I’ve also got the same thing. I’m really scared. I don’t know what this means for my track and field or even my life’, and she responded with so many positive messages,” says Nielsen.

“We ended up exchanging numbers and we’ve been in contact throughout all these years. She has been such a good friend to me.

“After the Commonwealth Games, she ran over to me and I hugged her for like five minutes. She’s a massive source of inspiration.”

Now, Nielsen is looking ahead and focusing her energy on the 2024 Paris Olympics.

“I feel like there’s this kind of added pressure from the outside to hopefully perform a little bit better next year and going into 2024,” she says.

“I went five years with no relapses before those World Championships so I’ve managed to get a good chunk of training in and to really climb the ladder.

“With relapsing-remitting MS, you can be healthy for a long period of time. And so it doesn’t so much hinder your day-to-day life – I can still perform at a good level and aim for those world and Olympic finals.”