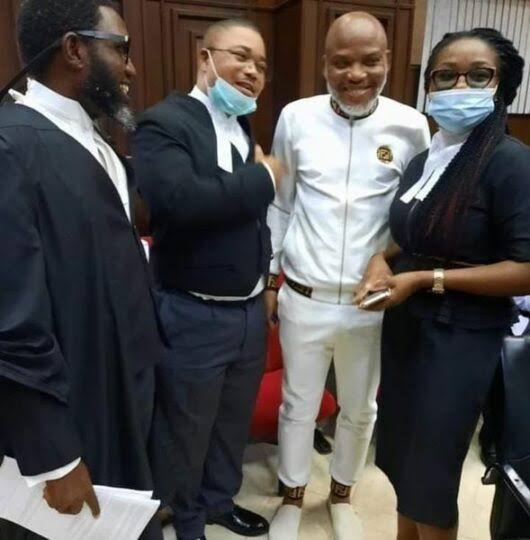 THE leader of the proscribed Indigenous People of Biafra, (IPOB), Mazi Nnamdi Kanu, standing trial for felony in an Abuja Federal High Court has lost his application for bail.

In declining Kalu’s application at the Federal High Court on Wednesday, Justice Binta Nyako demanded that Kanu must explain the reason he breached a previous bail before a fresh one will be granted.

The trial Justice implored the parties to let the case go on trial for the charge to be determined, as the trial had suffered various setbacks since 2015.

According to the court, over 19 interlocutory applications have been filed in the matter.

He also prayed the court to order the Department of State Services, (DSS) to produce his medical report, noting that the DSS lacks the necessary medical facility to cater for his health needs.

He told the court that he was severely tortured for eight days in Kenya before he was repatriated back to Nigeria for trial.

His health, he said has deteriorated, following “a highly poisonous substance” injected into his system.

Kanu, told the court that he was in solitary confinement and he was daily exposed to mental torture.

He pledged that he would not commit any offence while on bail and that he has “credible and reliable sureties.”

Explaining that he was previously released on bail on health ground, Kanu, argued also that he has not been tried or convicted by any court of law in the country, contending that he was entitled to bail.

The prosecution urged for a refusal of the bail application, and claiming that with the defendant would default again conscious of the nature of his case.