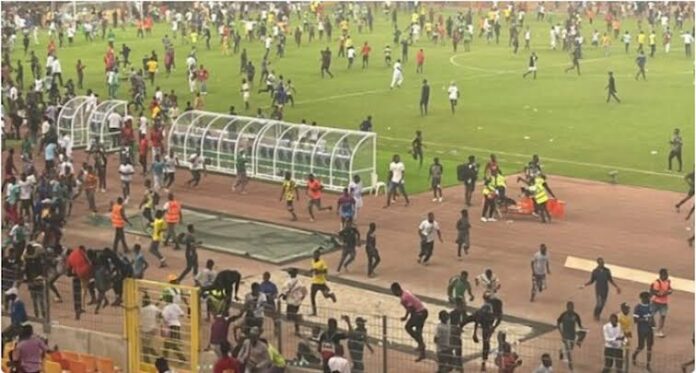 THE Fédération Internationale de Football Association (FIFA) has penalized the Nigerian Football Federation (NFF) and the football associations of five other African countries following the conduct of World Cup play-off matches in March 2022.

Nigeria, who were knocked out of qualification race on away goals, were fined $154,000 and must play one match following invasion of the Abuja pitch by fans after the second leg against Ghana.

The other countries affected are Algeria, Egypt, Morocco Senegal and DR Congo

While the North African countries  – Algeria, Egypt and Morocco were fined, Senegal, Nigeria and DR Congo were ordered to play one match behind closed doors as well as being fined.

FIFA did not order the replays requested by Algeria and Egypt.

The list of decisions published by Fifa does not include any instructions for any replays or overturning of results.

Algeria had in a petition sought a replay of their second-leg home loss to Cameroon in a match that led to the elimination of the Desert Foxes on the away goals rule.

The Algeria Football Federation and the national team coach Djamel Belmadi were not satisfied with calls by the Gambian referee Bakary Gassama.

Senegal, which will also play one game behind closed doors will pay a fine of $180,000. The country were found in breach of Fifa’s disciplinary code in their second-leg win over Egypt that saw them qualify for the World Cup.

In the match that involved the Taranga Lions,  Fifa noted: “Failure to implement existing safety rules and failure to ensure that law and order are maintained in the stadium, invasion of the field of play, throwing of objects, lighting of fireworks, use of laser pointers and use of objects to transmit a message that is not appropriate for a sports events – offensive banner.”

Egypt request for a replay of the game in a complaint to Fifa pointed to the issues listed by fifa as basis for the demand.

The Egypt Football Association were fined $6,000 after the referee cautioned six individuals on the Pharaohs squad during the match in Dakar.

Like Nigeria and Senegal, DR Congo will also play a match without spectators after a pitch invasion following their first-leg draw with Morocco and they will also pay a fine of $123,000.

DR Congo will pay an additional fine of $5,000 for the “throwing of objects” during the second leg of the play-off, which they lost 4-1 in Morocco.

The Moroccans were not absolved of punishment as will pay $30,000 for the “lighting of fireworks, throwing of objects and blocked stairways” at the second leg game at the Mohamed V stadium in Casablanca.

2023 and Jonathan hunger for return to power