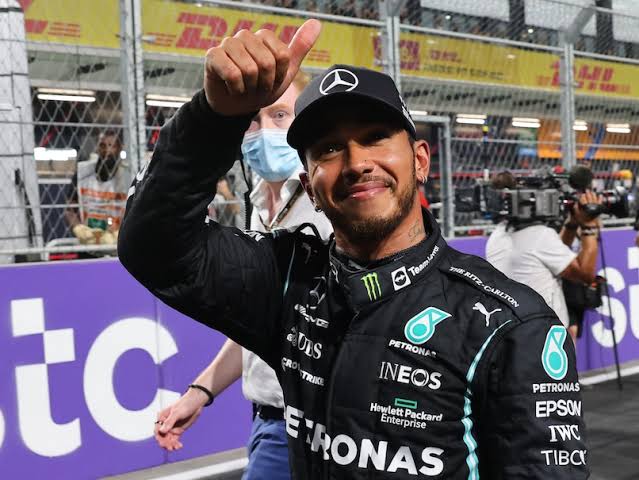 Lewis Hamilton has called for “older voices” with offensive views to be refused a platform on which to make comments.

His plea came after Nelson Piquet made a racist remark about him, and following provocative remarks from Bernie Ecclestone about Vladimir Putin.

Mercedes driver Hamilton said: “Discrimination is not something we should be giving a platform. We need people to be bringing people together.”

He added: “We are all the same and the comments we are seeing are not helpful.”

Hamilton’s remarks come in the context of triple world champion Piquet using a racially offensive term to refer to the seven-time champion in a podcast that emerged this week.

And on Thursday morning ex-F1 boss Bernie Ecclestone 91, in an interview on ITV’s Good Morning Britain, voiced his support for the Russian President and his actions in Ukraine.  Ecclestone, said he would ‘take a bullet’ for Putin.

“There needs to be some accountability,” said Hamilton. “You know what you’re going to get [with Ecclestone].

“I don’t know what their [the broadcaster’s] goal is. To hear from someone that ultimately believes in the war, displacement of millions of people and the killing of thousands of people; the person who’s doing that, they support him. And I can’t believe that’s what heard today.

“This is going to put us back decades, but we have yet to see the real brunt of the pain, We don’t need to be supporting that any more. There are plenty of people out there who want to be positive. If they don’t want to be positive, don’t give them the space.

“No more can we be amplifying these voices that are creating that divide.”

Hamilton was also referring to an interview given by another three-time champion, Jackie Stewart, who said last week that he thought Hamilton should retire.

Hamilton, who has long been frustrated by what he sees as Stewart’s negative attitude towards him, said: “These past two weeks I don’t think a day has gone by without one of these people saying negative things or trying to bring me down.

“But I’m still here. Lip service is not good enough, we need to push for action.

“I’ve always tried to take the high road and be respectful. Why do we give these guys a platform?

“They are clearly not willing to change and these undertones of discrimination and micro-aggressions in today’s world are not helpful, it is creating more division. I love when Michelle Obama says: ‘When they go low, I go high,’ and that’s what try to do.”

In a dispiriting week for motorsport with regard to racism, Red Bull have also sacked their reserve driver Juri Vips after he made an offensive remark on an online gaming stream.

Asked if he believed F1 had a racism problem, Hamilton said: “We are living in the world and there is still discrimination all around the world, you see it all around you,. These micro-aggressions come out., enough is enough, no-one should have to brush off racism and it shouldn’t be for me to have to brush it off. We need big organizations to take a stand.”

Piquet is the father of Max Verstappen’s partner Kelly Piquet. Until Thursday, neither Hamilton’s 2021 title rival or his team had commented on the matter.

On the first day of the British Grand Prix weekend, Verstappen said at Silverstone: “Everyone is against racism, it is very straight. The wording used – even though from different kinds of cultures and things they said when they were little and younger – was not correct and that will be a lesson for the future not to use that word because it is very offensive.

“I have spent a bit of time with Nelson, more than the average person, and he is definitely not a racist and he is also a pretty nice and relaxed guy. The statement he released, you can see the word in two ways but it is still better not to use it.”