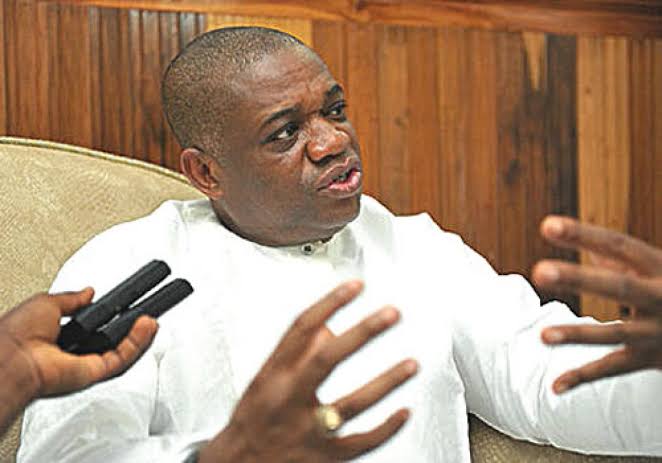 FORMER governor of Abia State and Senate Chip Whip, Orji Uzor Kalu, made a name for himself as a football enthusiast, during his tenure as  governor. He prominently supported Enyimba Football Club, which made history by clinching the African club championship.

Due to his frontal attacks on the former president, at the end of his second term as governor, Kalu decided to prosecute his succession plan outside PDP. In a bid to dock the federal might, which was arrayed against him within PDP, in 2006, Kalu joined hands with some of his political associates to found the Progressive Peoples Alliance (PPA).

The founding of PPA enabled Kalu to contest the 2007 presidential poll. Being the presidential standard bearer of PPA also facilitated his determined effort to implant a preferred successor in the state. It was against the background of that political scheme, which was hailed as a masterstroke, Kalu was sold as a master strategist, because, though he could not win the presidential poll, he succeeded in routing PDP and the much vaunted federal might to produce Chief Theodore Orji, his former Chief of Staff, as the governor of Abia.

However, having succeeded in displacing the PDP and Obasanjo’s preferred candidate for the governorship, Kalu was grabbed by the Economic and Financial Crimes Commission (EFCC) to account for an alleged misappropriation of state funds running into billions of naira.

Yet, while the EFCC operatives were on him like blank ants, Kalu fought back through the courts, which granted him a breathing space to seek election into the Senate as member representing Abia North Senatorial District as PPA candidate. He was however floored by the irrepressible Comrade Uche Chukwumerije of PDP.

Two years into the PPA administration in Abia, Kalu fell out with his political godson, the governor. In the build up to the 2011 general elections, Kalu and his political godson staged a drama of defection in which both were struggling in a spirited return bid to PDP, after his successor made a detour from joining the All Progressives Grand Alliance (APGA).

Within the period Kalu left office as governor, he experimented with the formation of a pan-Igbo political group called, Njiko Igbo Movement, ostensibly to serve as a launching pad for the emergence of a Nigerian president of South East extraction.

Assisted by Senator Emmanuel Onwe, a British-trained criminologist from London School of Economics, Kalu succeeded in opening up Diaspora chapters of the movement.

But, although Kalu rejoined PDP after the 2011 poll, his estrangement with the incumbent governor, who won a second term on the party’s platform, drove him (Kalu) back to PPA to contest the senatorial election once again. As PPA candidate, Kalu was once more beaten by a PDP candidate in an election that was keenly contested from the ballot through the election petition tribunal up to the courts.

After a repeat poll, which he lost, Kalu retraced his footsteps back to PDP. However, his stay in PDP was again cut short. Perhaps, in response to Supreme Court ruling, which okayed his trial by EFCC, Kalu joined the governing All Progressives Congress (APC).

As a member of the governing party, Kalu regained his voice and enjoyed media visibility with his grandiose claims of how the party would register 90 per cent of all the votes cast in South East geopolitical zone. Further, he regaled Nigerians with tales of how close he is to President Muhammadu Buhari, especially a recapitulation of how he brought together Generals Buhari and Ibrahim Babangida in his country home, Camp Neya, and resolved their long term differences.

Kalu continued sending messages of his powerful connections culminating in his award of the title, Danbaiwan-Hausa by the Emir of Daura. Riding on the crest of that acclaim, it was easy for the former governor to clinch the APC Senatorial ticket for Abia North Senatorial seat.

But, although he won the election and went on to be selected by his colleagues in the Red Chamber of the National Assembly, his joy was cut short. Kalu’s electoral triumph and emergence as Senate Chief Whip was garnished with a 12-year jail term. He was convicted by the court on those charges of corruption that hung on his neck like an incubus since 2007.

For six months, Kalu, who also has the traditional chieftaincy title of Mmili Lili Enyi (Sea that swallowed up an Elephant), was limited to the Ikoyi Prison. And, while the Senate Chief Whip was out of circulation, the Senate debated and passed the 2020 appropriation bill.

As was to be expected the PDP candidate that was defeated in the 2019 Senatorial election from his Senatorial District excited protests, demanding that Kalu’s seat be declared vacant so that Abia North could enjoy constitutional representation like others.

However, remembering the age long friendship with the embattled Senate Chief Whip, the President of Senate, Dr. Ahmad Lawan, paid deaf ears to the clamour for Kalu to be replaced on account of his imprisonment. Opposition senators sulked in the quiet expectation that the Senate President cannot withhold action for long on the matter in the light of the 12 years’ slammer on the Chief Whip.

But, like a cat with nine lives, on May 8, 2020, the Supreme Court ruled that Kalu’s trial and incarceration were riddled with procedural errors and ordered a retrial, as well as his release from prison. In their unanimous judgement, the seven-man Justices of the apex court headed by Justice Ejembi Eko held that Kalu’s conviction was null and void.

Justice Eko faulted Justice Mohammed Idris, who convicted Kalu, stressing that the fact that he (Justice Idris) had already become a Justice of the Court of Appeal before convicting Kalu rendered the procedure technically defective.

Breathing the fresh air of freedom, Kalu regained his seat at the Senate and started making arrangements to contest the APC presidential ticket for the 2023 poll. He joined the agitation for the zoning of the presidency to the South, particularly the South East.

However, as the days leading to the beginning of activities for the 2023 general election approached, especially the politics of the governing party’s national convention, the Senate Chief Whip started making hard to comprehend statements and demands.

It was perhaps out of his belief that the Senate Chief Whip was playing a double game that the national leader of the party, Asiwaju Ahmed Bola Tinubu, paid Kalu a visit at his Asokoro residence. Although, their discussion was behind closed door, Kalu disclosed that they were putting heads together for the interest of APC.

By that time, words have started filtering out that Kalu was secretly working for the emergence of his friend, the Senate President, as the party’s presidential standard bearer. But in a bid to keep his presidential aspiration alive, Kalu boasted that he would match Tinubu naira to naira for the party’s ticket.

Yet, when APC announced N100 million fee for the party’s presidential nomination forms, Kalu adopted an ambivalent posture, contending that unless the position was specifically micro-zoned to South East he would not participate.

It was not until some unnamed persons purchased the presidential nomination forms for Lawan that it became obvious that Kalu was trying all the while to reciprocate Lawan’s gesture of not declaring his Senate seat vacant by supporting the Senate President’s presidential gamble.

By the time Kalu joined the Imo State governor, Hope Uzodimma, to return Lawan’s presidential nomination forms to the party secretariat, all pretensions were gone that Kalu was a master strategist was gone as most Nigerians queried, why Lawan of all people?

The denouement came on the day of the special convention, when Kalu’s candidate came a distant fourth. It became obvious that the master strategist misread his data or allowed his heart to over rule his head.

By abandoning his fellow colleague of class 99 governors, who visited to solicit his support, by traveling up north and swimming against the tide, it must have dawned on the Kalu that the APC politics is like a deep sea that swallows even the biggest elephant.

Who knows, Kalu must have mistaken the tidal waves of the 2023 APC presidential calculations for a mirage. When Tinubu urged the Senate President to go lick his wounds, the jab must have been meant for all those who propped him for the great fall with confused strategies.

Article By Leo Sobechi was published in The Guardian newspaper