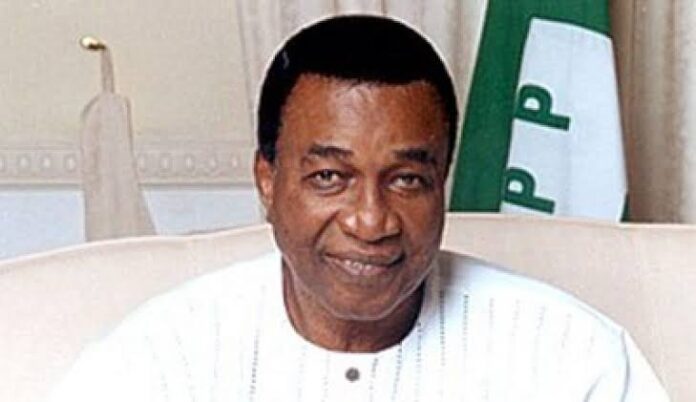 YOUTHS are craving for a change of narrative in the 2023 presidential. Did you expect such a outburst?

The youths have not been in the game and they want to change the narrative. Do they know all the intrigues in getting a president? Talking about president is not a tea party. It is something very important, it is about somebody who can handle all the troubles, all the problems of Nigeria. We need experience. There is nothing like experience and this man called Atiku has got the experience and I have no doubt that he was going to win and he won and I am happy that he won. And he is going to win; nobody is going to beat him.

You don’t think the youths have a case in blaming old politicians for the rot in the country?

There were many young people at the last presidential convention of the PDP. Did they win? While congratulating Atiku, I think the person I really thanked very much is the Governor of Sokoto State, Aminu Tambuwal. He saw the handwriting on the wall, withdrew and asked his people to vote for Atiku. If he felt he was better than Atiku, he would not have withdrawn. Age and youth go hand-in-hand. What about the character of the person? If you have a good person, whether he is young or old, he still remains good. If you are bad, whether you are young or old, you are bad. What is important is the innate character of the person.

How you feel about Alhaji Atiku Abubakar as PDP presidential candidate?

Atiku’s emergence as the PDP flag bearer has brought a lot of dimensions. It is clearer to me now that PDP will win because of Atiku’s experience. He has been on this for a long time. This is his third or fourth time and I don’t see how anybody else, any other candidate will beat Atiku.

You don’t see victory then for the ruling All Progressive Congress (APC)?

Which candidate from APC will beat Atiku? And I am an Igbo man but I believe that what I want is for PDP to win. If PDP wins, the Igbo have won. For me, the most important thing is that Atiku has clinched the presidential slot for PDP and based on his public and private sector experience, he will make some difference in this election. Besides, Atiku will bring back all the angry PDP stalwarts.

What do the Igbo stand to gain from Atiku’s presidency?

When Atiku was going last time, he picked Peter Obi and Atiku has always said that he is the person that can hand power back to Igbo and I trust him. I trust what he says. I have worked with him and I know him. I know that he doesn’t talk much but he acts. So, I believe absolutely that his emergence is a victory for our people.

Do you think he will restructure the country?

Are you not talking about Igbo presidency at this time?

You don’t believe Igbo presidency can come from the APC?

No. I believe that it is more likely to come within PDP than APC. I have very good friends in APC but tell me one Igbo man whose name has been sounded in APC?

What if another person had emerged from PDP as candidate?

We had governors Aminu Tambuwal and Nyesom Wike…

No, all these are young men. Tambuwal is very sensible. He is extremely sensible. He saw that he wasn’t going to make it, he decided to give it to his elder brother whom he knows will carry the Igbo along. You see, the issue of Igbo presidency is as a result of the treatment we are receiving now.

How do you mean?

Under Buhari and APC, the Igbo have suffered. This is the worst we have had.

Will it be different under Atiku?

How did you feel when Obi left PDP?

I was very sad. I called him and said why did you leave the PDP? He said one or two things happened and I said, he should have waited for me; he should have spoken with me. I would have advised him not to leave. The beauty of politics is being able to absorb things. At times you absorb insults but you have your eyes on the ball. I blame him for going. He should never have left because if Obi were there, Atiku will have no problem in picking him as his running mate.

But he has emerged to contest against Atiku from Labour Party…

In every country where democracy is practised, there are always two important parties. In America, Republicans and Democrats, in Britain, it’s Labour and Conservatives. In Nigeria, it’s PDP and APC. So, in all these other countries that I mentioned, when did somebody from a smaller party become president?

How would you rate Nigeria in the last seven years after you admitted that Buhari’s government has not really favoured the Igbo.

First, I don’t think Buhari likes the Igbo. He has shown it in his attitude. I know him very well. Once Buhari makes up his mind about something, it is difficult to change. He believed that the Igbo did not vote for him, so he preferred to deal with those who voted for him. But a good politician will deal so mercifully with those who didn’t vote for him in order to attract them to him, he didn’t do that.

What’s your rating of his handling the economy and security?

There is no money in the country; foreign exchange at the time Buhari took over was N195 to a dollar. Today, it is N500, N600 to a dollar. That is an abysmal failure in terms of currency. Today, it is unheard of that a luxury train from Abuja to Kaduna was attacked. The bandits entered there, in fact, I am told that up till now, some of those kidnapped have not been released.

How do you feel about that state of insecurity in the South-East?

It’s called sit-at-home. How can you imagine people you don’t know, faceless people say that you must sit at home and people sit at home?

As a stakeholder in the Igbo agenda, what have you and other Igbo leaders done to curtail this?

I was governor of Anambra, Enugu and Ebonyi and we had peace because we had a president who was careful, and bothered so much about the safety and security of his people; so we pulled the way we wanted and nothing happened. We disagreed, nothing happened but we had one Nigeria. Today, would anyone say we have one Nigeria? It is no longer the Nigeria I know. This was a beautiful country. I was born in the North, schooled in the West, worked in the West and became governor in the East. When I got married, Abubakar Rimi, a Fulani governor was my best man. We were so close that he was my best man. We went to church and sat together on the front seat. The only thing remaining for Rimi to do was to take Holy Communion. I told him, “you cannot take Holy Communion.” He said, “if you brought me here, I should take it.” I pleaded with him not to be angry. We had one Nigeria; there was no difference between a Fulani man and an Igbo man. I think something must be wrong.

How can we get it right?

That is why I said that Atiku’s victory in this convention is victory for Nigeria.

Would you call on the Igbo to vote for Atiku?

With less than one year for President Muhammadu Buhari about to leave office, what  advice would you give him with regarding his legacy?

The legacy I would like him to leave is first, security of lives and property. He should do everything to reduce the amount of killings in Nigeria. You don’t joke with the lives of people, every life is important. Let him focus on security and ensure that people are safe wherever they are and that people are free to live anywhere in Nigeria. I believe that he can do that if he decides to.  He should bring back peace, unity, love, faith in Nigeria.

Do you see Nigeria emerging stronger, in the face of multifaceted challenges?

Yes, it will. Give Atiku a chance, let him manage this Nigeria and you will see a difference.

Do you have anyone to suggest to Atiku as his running mate?

He should pick whoever he likes and can work with. He is the presidential candidate.